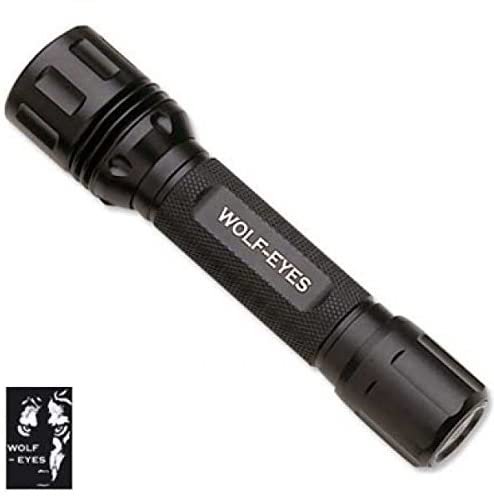 It took me quite a while to convince myself to purchase the Wolf-Eyes Raider, but after I did, I am completely satisfied with this excellent product. With the LED tail cap included, it is a versatile and very useful flashlight that I turn to every night. Once you have a tactical flashlight, it is tough (impossible) to go back to inexpensive grocery store lights.

The build of the Wolf-Eyes Raider is high quality. The body is full metal, with a durable black coating. Paint has only come off where I chipped the metal on the tail cap, which I will not blame the Raider for. The lens appears to be glass, and is not easily scratched because it is recessed into the head of the light.

There are slight ridges on the Wolf-Eyes Raider, which are meant for grip and anti-roll. The Raider will still easily roll on a surface, but if you carefully set it down on one of the ridges, it is fairly secure. The anti-roll devices could be improved, but it not a problem to be concerned about.

The Wolf-Eyes Raider is extremely ergonomical, because of the two flat sides on the middle body. When held in either an overhead tactical position or an underhand position, the palm and fingers both rest on a flat side, which secures the Raider from twisting in the hand. The ridges on the tail cap make twisting it very easy also. Any form of slipping as never been a problem with the Wolf-Eyes Raider.

I’m not sure how waterproof the Wolf-Eyes Raider advertised to be, but I have placed it inside a bucket of water for a half of an hour without any water leaking inside. It is also usable under water for more fun, but I would test your individual light without the electronics inside first before extended use underwater.

After extended use, the head of the Wolf-Eyes Raider gets slightly hot, but the cooling fins do a good job of keeping the temperature down.

The hot spot beam of the Wolf-Eyes Raider is slightly oblong, but is free from any artifacts. It’s a decent throw flashlight for its size, although not as well as the turbo version could. The Wolf-Eyes Raider easily can light up deer eyes in a field from 150+ yards with the stock bulb, and even farther with a Lumens Factory EO-9 bulb, which is estimated at 380 lumens.

Half of the reason the Wolf-Eyes Raider is so great, is the option to buy an LED tail cap with the light. Do not go cheap and skip over the LED tail cap, it is very useful in EDC situations (Everyday Carry). A lot of times, you don’t need or want 200+ lumens blasting ahead of you. It is nice to have a soft LED for navigating or reading things up close.

The way the Wolf-Eyes Raider functions is very unique. With the led tail cap on the back, the method of using the flashlight needs to include the main lamp and the LED into one button. Once you get used to the Wolf-Eyes Raider, its function becomes instinct, and is very easy to use.

A ridge around the LED tail cap allows the user to push the LEDs on with your thumb, so that you don’t interfere with the LED light. Additionally, you can twist the LEDs on and then set the Wolf-Eyes Raider vertically in candle mode, which will provide sufficient light for navigating a room at night.

If you do purchase the Lumens Factory EO-9, I have figured out some work around methods to make it function correctly. First of all, with the attached outer spring, the bulb will never fit into the Wolf-Eyes Raider. Take the outside spring off of the EO-9 bulb, before installing it. If the bulb still doesn’t work, look at the location where you removed the outer spring. The spring used to provide an electrical connection between the metal, and it needs to be replaced by a small piece of wire. Either make a wire loop to wrap around the outside, or solder the gap together to get the bulb working again.

While the original bulb is decently bright, and provides longer runtime, I prefer the EO-9 now that I have rechargeables. The difference in brightness is not extreme, but it is enough of a difference to make it count.

I highly recommend purchasing a quality pair of rechargeable 18500 lithium batteries with the Wolf-Eyes Raider. Normally, it takes 3 CR123 batteries, which quickly become costly when every refill costs $6. You don’t get to experience the full fun potential of the Wolf-Eyes Raider until you can shine it without guilt of it costing $6 an hour to run. Plus, you can top off the rechargeable whenever you want, keeping the Raider at top brightness.

The tail normally is loose enough to be turned by the one hand that is holding the Raider. If it becomes difficult, take both of the threads apart and clean them dry. Then add some new white lithium grease, and the Wolf-Eyes Raider’s threads will be brand new and easy to turn again.

If you have never purchase a high performance flashlight before, the initial price may be a little staggering. This flashlight is high quality, but still very affordable compared to more expensive SureFire flashlight. After purchasing lithium rechargeable battery along with the Wolf-Eyes Raider, the flashlight will serve you for many years to come. Aside from replacing the bulb or batteries after their life has expired, this flashlight is very durable, and will never let you down.