We’ve reviewed some of the top throw flashlights on the market this year, but which one is the absolute best?
If you need the brightest long throw flashlight (Portable Sun?🌞 )

If you need a compact and lightweight pocket thrower flashlight:

Throw flashlights can be a vital survival or tactical tool. And if you’re using it for these purposes, you want to make sure you have the best flashlight money can buy. We’ve done all the hard work for you and compiled a list of the best throw flashlights for 2021

What is a Throw Flashlight?

Flashlights with good “throw” are often referred to as “throwers” or “long throw flashlights”.

What makes these flashlights unique is that they don’t necessarily illuminate the area close to the flashlight (like how a lightbulb lights up a room). Instead, it throws out a concentrated beam of light to illuminate objects far away. It’s the distance, not the area, that’s most important.

Throw flashlights can be used for:

Now that you know what a thrower flashlight is, let’s take a look at the best flashlights on the market. 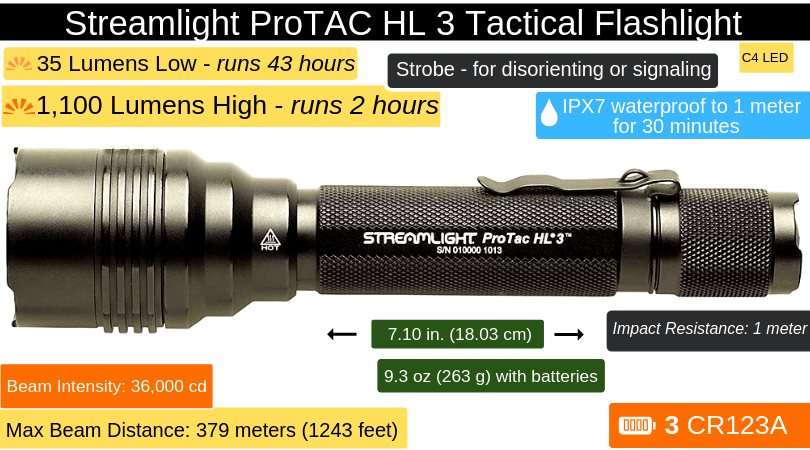 Looking for the longest throw flashlight? The Streamlight ProTac HL3 may just be the right flashlight for you. With 1100 lumens and a 379-meter (approx. 1,243 feet) beam, this is easily one of the brightest tactical flashlights on the market. Many also consider it the best long throw flashlight around.

Designed for serious users, this is a multi-function flashlight that allows for one-handed operation, removable pocket clip and an anti-roll face cap (Overall very good EDC Flashlight) . It’s powered by three lithium batteries that have a shelf life of 10 years. 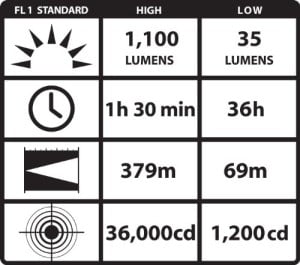 • Waterproof to one meter for up to 30 minutes

• This flashlight boasts the longest run time on our list of up to 520 hours on lowest setting.

The Nitecore P16 isn’t quite as powerful as the P12, but it’s a close second. This model features a 960 lumen output with Cree XM-L2 T6 LED.Using patented digital optics technology, this flashlight boasts a flawless long range beam with a maximum distance of 289 meters (about 948 feet).

Like the P12, the P16 is intuitive and smart. It features four brightness levels: high, medium, low and lower. The selected mode is memorized – even after you turn off the flashlight. Strobe and SoS functions are also included.

• Mode switch allows for easy access to the flashlight’s function

• IPX8 rated waterproof (up to 2 meters) 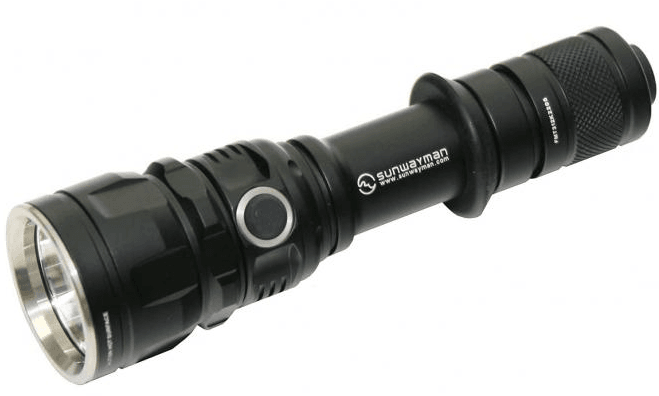 On Turbo, the Sunwayman T20CS features a 658 lumen output and maximum beam distance of 276 meters (about 912 feet). The T20CS isn’t as bright as the other flashlights on our list, but its long throw is impressive.

• Side switch for easy mode selection

If you’ve never owned or used a thrower flashlight before, you may not know what to look for when buying one. There are a few important things you want to consider when looking at different models:

Throw flashlights are known for having long beam distances. Most people assume that the longer the beam is, the better the flashlight is. But that’s not always the case. It really depends on what you’re using the flashlight for. If you’re only buying a throw flashlight to monitor activity in your yard, you may not need an extremely long throw. 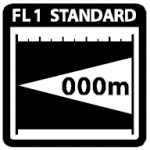 Take the ProTac HL3 (listed above) for example. It features a beam distance of 379 meters. That’s about 1,200 feet. This a great option for security or tactical, but it may also be practical in survival situations. But if you’re using it to monitor activity in your yard, it may be impractical. A shorter beam distance will probably suffice.

The bottom line: choose a beam distance that’s appropriate for your flashlight use.

The lumen output is also important. The higher the lumen, the brighter the light. In most cases, brighter is better – especially with throw flashlights. Chances are, you’ll be using your thrower flashlight outdoors. And you’re going to need all the help you can get if you need to illuminate long distances.

Another thing to consider is the LED’s lifetime. Some LEDs boast a 50,000 hour lifetime. This means you could leave the flashlight on for 2,083 days straight before the LED would die out. That’s more than efficient for any use. Just about every throw flashlight will list the lifetime of the LED in the product description.

The throw flashlights listed above are the best on the market with high lumen outputs and boast impressively long beam distances. No matter whether you plan on using it for survival or tactical purposes, these models are the most reliable and brightest you can buy.